Duration 5hours
Starts
Cusco (visit to the ruins of Qoricancha at 1:30 a.m.)
Ends
Cusco at 18:30 pm (Return to Cusco)
Trasportation Included
Small Group
Cancellation Policy   Flexible
CHANGES: Due to the pandemic, you can make changes to your reservation up to 48 hours before your trip at no additional cost.
NO SHOWS AND CANCELLATIONS: If you cancel 30 days before the tour before 6:00 pm (Lima time), an administrative charge of 60% will be applied. After this time, there is a 100% cancellation or no-show fee.
SAFE ADVENTURE - Covid 19
This activity includes the appropriate protective measures to ensure your safety. In addition, our excursions are carried out in the open air and in small groups to reduce the risk of contagion. Remember to follow the instructions of the staff during the development of the tour.

The city of Cusco is not only the largest tourist center in Peru because it has many places of cultural and historical heritage. The city is the living testimony of an incredibly history.

Exploring Cusco is a fascinating way to visualize the different cultures that shaped the history of Peru and we must prepare to know many of the wonders that hide in the region, such as Machu Picchu, the Sacred Valley of the Incas or the Mountain of colors. During this visit you will appreciate the beautiful cathedral of Cuzco, the temple of Qoricancha and the archaeological sites of Sacsayhuaman, Qenqo, Puka Pukara and Tambomachay.

Our tour will begin with the pick-up of the hotel at about 13:30 pm from your hotel in Cusco. They will pick us up and take us to the tourist bus, which will take us to all the stops of our tour. Our first stop will be the archaeological center of Qoricancha where we will be with the guide for approximately 1hr visiting the ruins and the temple of Qoricancha which has to pay S / .15.00 nuevos soles.The archaeological center of Sacsayhuaman is located just 3 km from Cusco and is the most impressive Inca citadel. To this day, in this place the festival of the sun is celebrated every June 24, known as the “Inti Raymi” where we will be visiting it for an average of 1hr. Then from here we will continue to the archaeological center of Qenko, which was a religious and ceremonial place for many Inca traditions.The archaeological center of Qenko is an outcrop of limestone on which intricate mythical representations have been carved. where we will be visiting for an average of 1hr. Although the true name of this shrine is unknown, at the time of the conquest, the Spaniards decided name it Qenqo, labyrinth in Quechua, maybe by labyrinthine underground galleries, or by the zigzags carved channels in the rock.Puka Pukara is one of the ancient posts of the Inca Guard and rest stops along its main roads. Due to being on an elevated platform it was given the denomination of strength. However, its function is still uncertain. It is currently an obligatory place to visit during the stay in the Imperial City, After our visit to Puka Pukara we will go to the last destination of our tour: Tambomachay.The last destination of our tour is the archaeological center of Tambomachay. In this place, the ancient Incas worshiped water and is known as the spring of eternal youth. This archeological center is considered one of the shrines of the first "ceque" (huge imaginary lines, which were used to organize sanctuaries and huacas in the surroundings of the Antisuyo, departing from the city of Cusco).

What to Bring to City tour Cusco

Cusco expands by the valley that forms the Huatanay river and by the nearby hills. Its climate is generally dry and temperate. It has two defined seasons: a dry season between April and October, with sunny days, cold nights with frosts and an average temperature of 13 ° C; and another rainy, from November to March, average temperature 12 ° C. On sunny days, the temperature reaches 20 ° C, although the light wind of the mountain is usually cold, therefore wear.

Trekking to the Humantay Lake in 1 Day 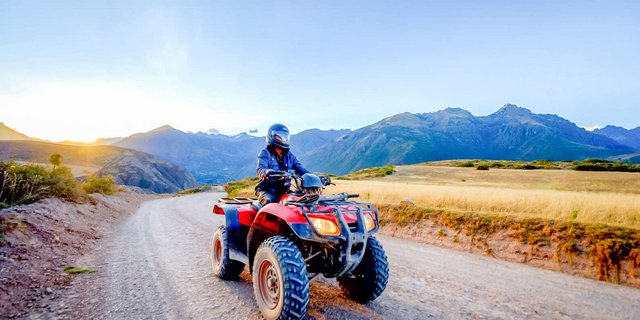 Maras Moray in a half-day ATV

1 Day Excursion to the Vinincunca Mountain

Excursion through the Sacred Valley of the Incas

We are an operating company in Peru.